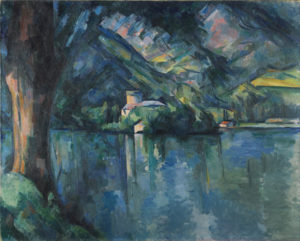 Le Lac d’Annecy represents the view from the water’s edge of the hotel[1] where Cézanne – at his wife’s insistence — had stayed with his family in 1896. It is a perfect work, based on an unimpeachable view. It helps, in fact, to see it next to its site, because the view is seductive and presents the painter with a quite different challenge: not that of representing it convincingly, but discovering in it what is genuinely interesting. Cézanne was aware of its ordinary appeal when he described it in a letter to Gasquet: “…it is still nature, of course, but a little bit as we have learned to see it in the travel sketchbooks of young ladies”[2].

The countryside is unfamiliar to him: alpine, dark blue-green, a well-known haven for well-to-do tourists. In the morning light, however, it transcends the postcard aesthetic: the château on the opposite shore is luminous, warm in color against the alpine hues, and to any eye, even Cézanne’s unsentimental one, odd: in the center, under the château building, a boathouse peers out whose windows and landing dock look like a face submerged in the water. Here, however – at least as he paints – Cézanne and the tourist part company: for him, that detail would monopolize the view and turn the landscape into a kind of anecdote. Cézanne leaves the boathouse wall blank. Instead, he incorporates its roof into the angles of the château roofs, and he locates those in turn in the system of diagonals which animate the whole upper half of the site. In the slopes of the hillsides he can easily see the rhythms that give the scene its unity, and he can find them in details as well, even in the sloping branches of the repoussoir tree (the tree that was present then, not the one that has replaced it). He can rest the dynamic upper half on a steady base composed of vertical and horizontal touches — and connect the two parts by the clear reflections of the château that appear early in the morning on days before any breeze has come up.

That kind of mirror-like surface would also reflect the greens from the upper half of the scene, so it seems likely that Cézanne saw in the water what he would have otherwise needed to put into it: the chromatic unity of the view before him. But he stops before going too far; the warm pinks and ochres which resonate with the blues and greens have a legitimate role to play only in the distant meadows. 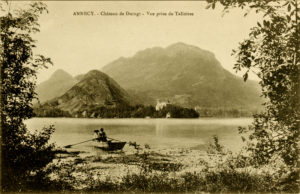 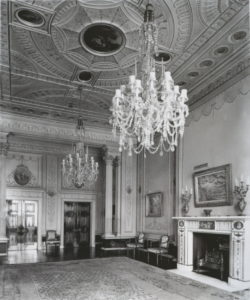