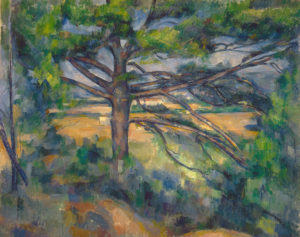 In the magnificent reworking of the Grand Pin et terres rouges (Bellevue) motif of ten years before, Cézanne uses a touch suggesting the tufts of pine needles in the upper part of the picture and an entirely different one for the foreground: there it is vertical and the patches have no sharp boundaries, allowing them to float in space. Some are much darker than others and appear further back, but a vagueness about the foreground remains. As we look at the composition, however, it soon seems justified by the space that it gives to the pine. The painting is more centrifugal than the earlier picture, with the tree expanding freely away from its trunk; the tree does not compete for attention with a busy foreground, as in the other picture, but contends with the solid sky for the space immediately next to it. Undistracted by the foreground, whose structure is left vague,we can remain riveted by the violent contortions of the branches. The saturated colors, the abstractness of the patches at the bottom, and Cézanne’s utter clarity of purpose, argue for a date closer to the 1896 Le lac d’Annecy (R805-FWN311) than to Rewald’s proposed 1890-95.