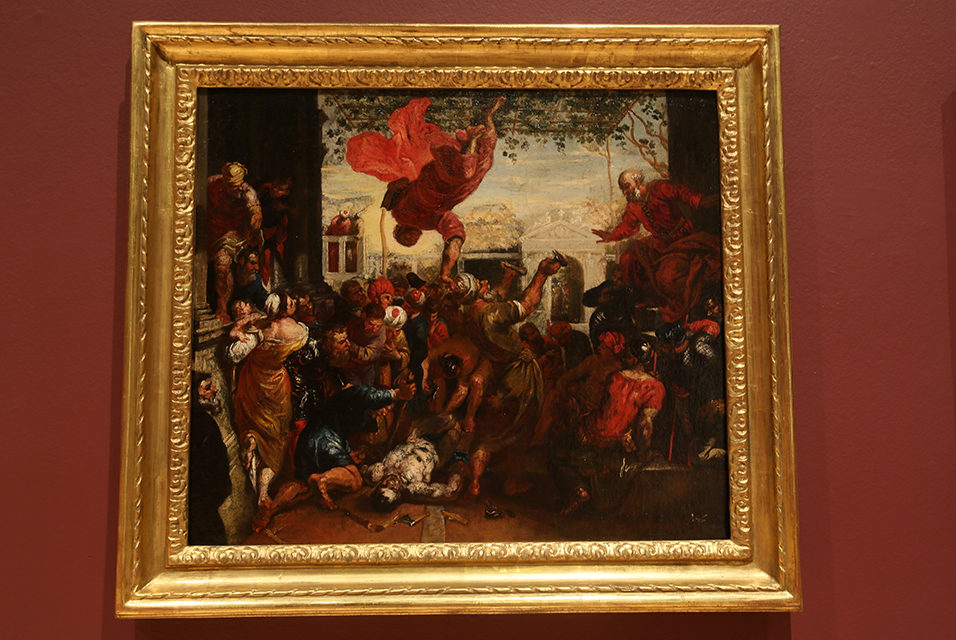 WILLIAMSBURG, VA.- John Spike knew he was looking at a Cézanne.

Analysis and testing of the painting “The Miracle of the Slave” have backed up his now certainty that it was painted by French artist Paul Cézanne as a copy of an original work from 300 years earlier.

The practice replica is part of the current Muscarelle Museum of Art exhibition The Art and Science of Connoisseurship that runs through Aug. 13. It’s made up of six paintings by Old Masters that Spike, chief curator, said the museum has been able to buy because they weren’t correctly identified.

Italian Renaissance artist Jacopo “Tintoretto” Robusti painted the original in 1548 and it is currently housed in the Gallerie dell’Accademia in Venice, Italy. It is referred to as “The Miracle of the Slave” or the “Miracle of St. Mark Freeing the Slave,” and depicts the story of St. Mark saving a slave who was being punished for worshipping.

The original is a much larger work, with Cézanne’s copy a smaller reproduction riotous with the myriad colors and characters of the original compacted onto the canvas. The reproduction was unattributed when it went up for auction at the Dorotheum auction house in Vienna, Austria, in 2013.

“And I saw it and I realized that it was a Cézanne of his earliest experimental juvenile period, the latter 1860s,” said Spike, who is one of the world’s most recognized connoisseurs of Old Master paintings and particularly the Italian Baroque artist Mattia Preti.

He alerted Muscarelle Director Aaron De Groft and they went to look at the painting and were sure it was a Cézanne before deciding to purchase it for the museum.

Spike is able to identify artists by knowing their work, including everything from exactly how they built up paint layers to subtleties in shading and shape, he said.

“All you need to know is his works of the 1860s,” Spike said. “You have to realize that artists develop throughout their careers. There’s no one Cézanne; there’s four Cézannes if not six. In other words, a Cézanne in the ‘60s is different from when he’s painting in a proto-Cubist way and showing all the facets of the volumes.”

Similarities typical of Cézanne’s work of the 1860s including “noodle noses,” darkened eyes and thicker globs of paint also are present.

But there is also a scientific aspect, and De Groft and Spike decided that for this particular painting it would be worthwhile to do the full battery of tests, including X-rays and infrared paint testing.

Testing revealed multiple layers of paint on the canvas, which doesn’t prove anything particularly. But the presence of hand-ground paints did help with identifying the work.

“The hand-ground (paints) are simply not as finely ground as machine ground,” Spike said. “And so the way the light rakes across it, it looks different.”

The presence of the unusual pigment mauveine was the “most amazing and surprising thing,” he said.

Kristin Wustholz said that scientific examination found no basis to doubt Spike’s connoisseurship. She noted that science more often challenges — rather than confirms — an attribution of a painting. In the case of “The Miracle of the Slave”, though, science was able to add an arrow to Spike’s quiver.

Wustholz, an associate professor of chemistry at W&M, has been working in a seven-year partnership with Shelley Svoboda, senior conservator of paintings at the Colonial Williamsburg Foundation. They have refined and advanced a technique for identifying pigments in historic paintings and other artifacts.

Spike had asked Svoboda if it would be possible to date The Miracle by examination of the materials used. Susan Buck, an independent consultant, had performed polarized light microscopy on the painting, yielding some information from tiny samples she lifted from the painting surface.

But polarized light microscopy requires larger samples of the painting in order to get good results on pigment identification. The Svoboda-Wustholz technique uses SERS — surface enhanced Raman spectroscopy. It’s a minimally destructive technique that requires only the smallest sample and it is the state-of-the-art process for identifying a synthetic organic pigment.

Svoboda and Wustholz found an arcane pigment known as mauveine in the painting. Mauveine is a synthetic organic compound discovered by accident in 1856 by William Henry Perkin, an English chemist who was trying to synthesize quinine from coal tar.

“Mauveine is a very intense, pure hue,” Svoboda explained. “It’s a violet, maybe a little bit more toward the red family than the blue family.”

Wustholz explains Perkin made a fortune from a dye and chemical empire that grew from mauveine. Once it became mass produced, British society, from Queen Victoria on down, couldn’t get enough of that intense, pure violet hue.

“It had a really hot heyday for about a decade,” Wustholz said.

“It was a fad,” Svoboda added. “Your dress had to be that color.”

Scientists have pinpointed that mauveine was produced between 1856 and 1869 only, during which time Cézanne would have been between the ages of 17 and 30. He would have been in his early romantic period, and copying the works of other artists at that time, according to Spike.

The mauveine craze ended when people found that the pigment had quite a large Achilles heel. “The problem — and the reason that the mauveine craze only lasts 10 years — is that it’s not colorfast. It fades with time,” Wustholz said.

The fatal fading of mauveine is a chemical process, and the pigments of “The Miracle of the Slave” have undergone more than a century of chemical change before going to the lab. Because of the chemical changes involved, Wustholz says the pigment is either mauveine or a close chemical cousin, one of many that were churned out by the burgeoning dye industry founded by Perkin in the 19th century.

The presence of the mauveine family in the painting is significant for more than one reason. For one thing, the time of Cézanne’s early career coincides nicely with mauveine’s fad years. Svoboda said that the presence of mauveine adds weight to Spike’s attribution, but there is another aspect to the discovery.

“From what we have been able to determine, no one has found mauveine in a painting before,” she said.

Svoboda went on to explain that the scholarly literature on Cézanne and other artists is full of detail about materials and techniques, “but mauveine is not in any of the catalogs. No one, to my knowledge, has even looked for it.”

If mauveine is an obscure material among painting connoisseurs and conservators, the color has the same significance for chemists that the Wright brothers’ bicycle shop has for aircraft designers.

“It’s not like mauveine is one little speck in the dye continuum. Mauveine is really well known to chemists because it’s the first synthetic organic dye in history,” Wustholz said.

Likewise, Svoboda has had experience working in material-culture artifacts beyond paintings. She knew about mauveine’s role in history and began looking at the reddish bits in “The Miracle of the Slave” with an inquiring eye.

“The mauveine was one little area of a turban that struck me as a very translucent glaze, which is almost always an organic dye-based color,” she said. “Painters like that transparency; the light goes in and the light goes out and it’s lit up from below. And it’s purple.”